Board of Directors and Officers

Tong-Ching Chang, Director, President and Treasurer, is a retired Certified Public Accountant. Ms. Chang developed her fascination with Chinese theater under the influence of her father, an avid fan of Beijing opera, while growing up in Taiwan. In high school, she studied Kunqu singing and flute playing from several prominent Kunqu scholars in Taiwan. Ms. Chang is the founder of the Wintergreen Kunqu Society, Inc. (WKS) and was a co-founder of the Society of Kunqu Arts, Inc. (SKAI). Since 1993 she has regularly organized and produced Chinese kunqu programs for the WKS and the SKAI (from 1993 – 1995) in the metropolitan Washington, DC area.

Charles A. Wilson, Director and Vice President, is Professor of Economics at New York University. Although a long time patron of the many of the performing arts, particularly classical ballet, he was first exposed to Chinese theater when he attended the performance of The Peony Pavilion at the Lincoln Center Summer Festival in 1999. He is particularly attracted to Kunqu theater because of its elegant integration of movement, music, and drama.

Yvonne Zheng, Director and Secretary, holds an MBA and specializes in accounting and financial management.  Under family influence, Ms. Zheng acquired broad knowledge and grew deep insight of kunqu and Chinese theater arts.  She has regularly supported non-profit organizations to promote kunqu in the northeast region, including the metropolitan Washington DC area, of the USA.

Wintergreen Kunqu Society, Inc. is a non-profit organization founded in 1997 to promote Kunqu theatre in the United States. It regularly sponsors productions of popular Kunqu plays featuring performing artists from major Kunqu companies in China and presents public performances in the Washington, D.C. metropolitan area, featuring some of the premier Kunqu artists in the world in order to provide an opportunity for the Western audience to experience authentic Kunqu Theater at its highest level. To further educate the public in the intricacies of this refined and sophisticated art form, it also sponsors master classes, workshops, and lecture-demonstrations. 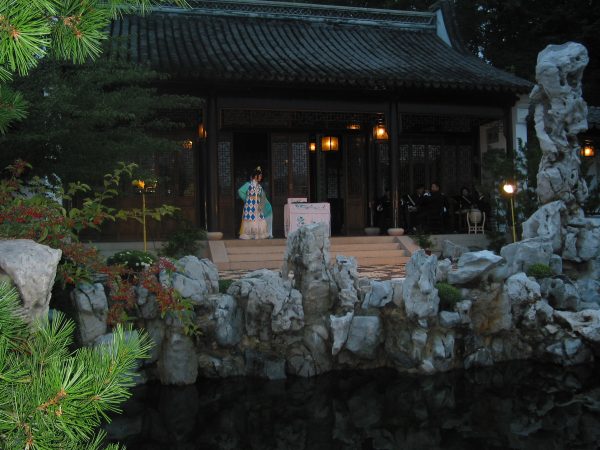